I’ve never given my mental health much thought. Not until recently anyway, as I’ve slowly begun to realise, whilst progressing through my twenties, you can’t just go on pretending you’re fine when you’re not. You’re not kidding anyone, least of all, yourself.

Mental health has always been – and to some extent, still is – an odd concept to people like me. Like many of my generation and certainly generations gone by, I’ve never felt encouraged to think about my mental health; how I can improve it, how I can monitor it, let alone how to spot signs that I may need help. And yet, its precisely now, in my mid twenties, after years of neglecting my mental health, things will begin to catch up on me. And you. Especially men, especially gay men.

We need to learn the things about ourselves we didn’t learn back then.

I’ve personally been reminded of how important it is to have a grasp of our mental health in recent days, for a few reasons not least the terrorist attack in Manchester at the Manchester Arena on 22 May. My home city, a 20 minute walk from where my partner and I were sleeping, 22 lives were taken and our city is still coming to terms with the fact that the type of terror we’ve seen on our TVs for years has finally come to our front door.

I was amazed at how our city responded, not the outpouring of public sympathy and grief – I already knew Manchester looked after its own – but of the approach certain people and organisations took to Mancunians’ mental health. For instance: my place of work has widely promoted a 24 hour counselling service to colleagues and set a surgery up in the office for the 3,000 or so people who work there, in the shadow of the Arena. There’s even an informal mental health meet-up. Mancunian schools have set up similar services and we’ve been encouraged – everywhere we turn, even in the news – to talk about what has happened and work it through in the open, in the collective.

I don’t remember this happening after 9/11 when I was 11, 5 days into High School. I do remember going home early after our own school suffered a bomb scare. I also remember my mother crying in the car after picking me up. But, I don’t remember anyone talking about the impact the events would have on our mental health.

I never remember anyone worrying about anyone’s mental health. Not openly. We were fine, we didn’t worry about it and we didn’t talk about it.

Sean is seen wet shaving his hair to regain his feeling of identity. He lost his sense of individuality whilst being “that guy with a man bun”, George Muncey

And yet, apparently we’re not fine. Suicide is the number one killer in men 20 – 45 years of age and diagnosis of mental health issues is rising, with 50% of mental health issues established by the time we’re 14, 75% by the time we’re 24. It’s our generation who are shining a light on the issues because we’re feeling the burden of our own neglect.

In an attempt to also shine a light on the topic of men’s mental health, CALM, the Campaign Against Living Miserably, have recently unveiled their CALM Photography Movement at the Getty Images Gallery. The project aims to help men express emotion and invite discussion through the medium of photography. The collection includes images from professional and amateur photographers showing what it is to be a man in the modern world, which challenge traditional ideas of masculinity and encourage us to think differently about being men. 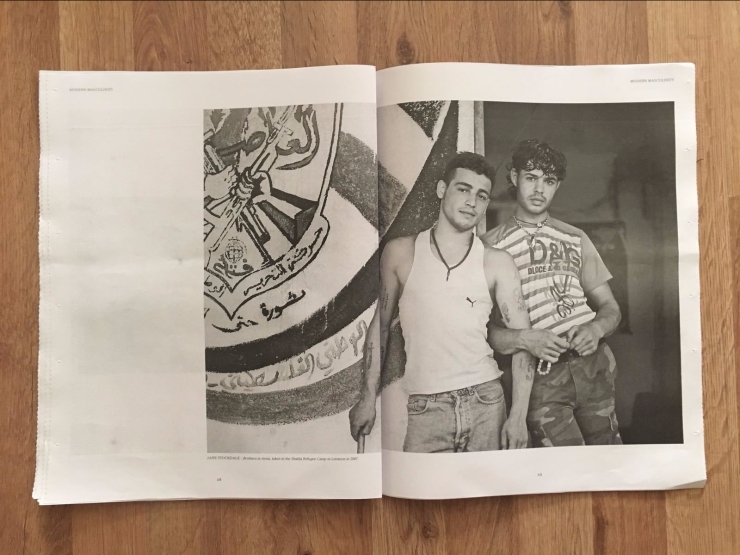 Brothers in Arms, taken in the Shatila Refugee Camp in Lebanon in 2007, Jane Stockdale

I was introduced to the project by Topman, a partner of the project, in a recent issue of their in-store magazine, which was dedicated to men’s mental health. The issue included contributions from Ian Taylor of AskMen.com on feminism and Jamie Millar of GQ and Men’s Health on meditation and is worth a read.

Another partner is Lynx, body-spray of High School locker rooms. This video is worth a watch.

Another surprising partner of the campaign are the Royals, HRH Duke of Cambridge, HRH Duchess of Cambridge and HRH Prince of Wales. Will, Kate and Harry have formed Heads Together, which brings together fundraising and awareness support for several mental health charities, CALM included. Their work raising awareness and encouraging discussion is to be commended and one such incarnation includes HRH Lady Gaga too.

If you’re struggling to find someone to talk to, there are many charities and organisations that can help.

As I go to publish this post, another terror attack has been reported in London. It is in light of these bombardments, we must take care of one another and of ourselves.